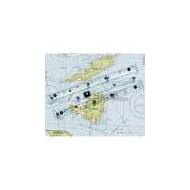 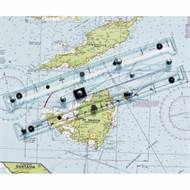 The GPS Plotter is a GPS chart plotter that provides a straightforward and effective interface between a GPS and a paper chart.

Nowadays, latitude and longitude are often read straight from the display of a GPS receiver much like the one found on the GPS chart plotter. However, despite advances in electronic charting, a thoughtful navigator at sea will always carry hardcopy paper charts as a reliable and inexpensive safety back up.

Traditional plotting tools do not lend themselves to plotting a position using latitude and longitude from a GPS as they were not designed for that purpose and are awkward, cumbersome and slow.

The Wems and Plath GPS Chart Plotter enables the latitude and longitude obtained from a GPS to be quickly, easily and accurately plotted on a paper chart in a simple two-step manoeuvre.

The GPS Chart Plotter does this with its innovative straight-line action and its special pencil guide holes.

Designed and manufactured in England, the GPS Chart Plotter is made in a sturdy clear acrylic for maximum chart visibility and in one size to cater for all chart sizes.

It also has a slip and grip feature that is especially welcome when the going gets rough at sea as it reduces the risk of inaccuracies.

The Weems and Plath GPS Plotter is considerably less expensive and intrinsically more reliable than electronic charts and does not suffer from their built-in obsolescence.

Despite being designed principally for use in conjunction with a GPS, the GPS Chart Plotter features protractor markings and can also serve as a conventional style plotting device and parallel rule.